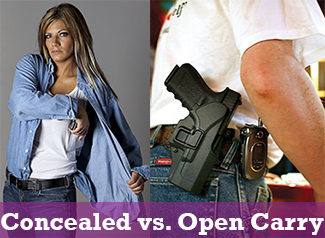 When you first start to carry a pistol you have an important decision to make whether you will open carry or conceal carry. The MCPPA (Minnesota Citizen Personal Protection Act) allows you to carry open or concealed. You have to think about the pros and cons of both open carrying and conceal carrying when making your decision.

Pros of open carrying: Allows you to access your firearm quickly, could be a deterrent to criminals from starting something when seeing the open firearm and  in the right situation it can turn into a teachable moment for others on the right to open carry.

Cons of open carrying: Can lead to a “MAN WITH GUN” call rather than a deterrent to criminals, can lead to unwanted encounters with gun haters and it allows your gun to be grabbed at any moment which means that a level 1 holster at minimum should be used.

Pros of conceal carrying: Allows you to fly under the radar from criminals, gun haters, Allows you the use of a level 0 holster with no retention or a button to push.

Cons of conceal carrying: Slower access to firearm in an emergency

Now that you know some of the pros and cons the decision is yours on which best suites you.

As an Instructor I carry both open and concealed. When I first got my permit to carry I started carrying open. I did this with a couple things in mind. First, I wanted to get over the various looks and things that come with carrying a firearm in plain sight. I open carry every time I teach a class because I use my firearm and my holster as a teaching tool. When I open carry I use this as a teaching moment with my children as well. I teach them not to be scared of it and not to make a big deal about it. When I conceal carry it is mostly when I am going out to with my family or to a family function just to fly under the radar so to speak. That teaching moment with my kids that I talked about really helped when I conceal carry because it is no longer a big deal to them, I found out that when I concealed my firearm if my shirt would come up now exposing my firearm I would then here Dad your “GUN” is showing and I would get looks from people around me, now that they are used to the fact that I am carrying they don’t say anything. My carry gun of choice is a Springfield XD Mod.2 I use a Blackhawk Serpa level 2 OWB holster and I also use an Alien Gear IWB holster.

While I was openly carrying one day in my local grocery store I did have an encounter with someone in the grocery store that evening. I was at the check out bagging my groceries as a man in his 50s is checking out on the register next to mine. I watched this man walk to the door, we locked eyes and he was just about out the door at this moment. My wife had said something to me and I turned and said “what was that”. I then felt someone grab my holster and then yelled in my ear ” THANKS BUDDY” I immediately grabbed my gun and turned now squared up to him and yelled don’t ever touch my F$@^ing gun. He backed off and got to the door and said “you need to keep that concealed”, at that moment I was shaking and was wondering what I was going to walk out to in the parking lot. When I got out to the parking lot not even 1 min. later the man was no where to be found. After some time to reflect on this particular situation I think he wanted to make a point in the fact that he doesn’t care that I carry but doesn’t want to see it. However it is not ok to grab for someone else’s gun period. He is lucky that he didn’t get shot or stabbed because there is only one reason someone will try to grab your gun and that is to use it and more than likely you will be the 1st target. I now have a few more reasons why I would rather conceal then open carry, however I don’t not let that stop me from open carrying I am just now a lot more aware in the fact of expect the unexpected.

The decision to open or conceal carry is a decision that should not be taken lightly.

CARRY ON MY FRIENDS CARRY ON!!

Want to join the discussion?
Feel free to contribute!

Use of Force – Castle Doctrine – Minnesota

So you want to get your permit to carry.
Scroll to top